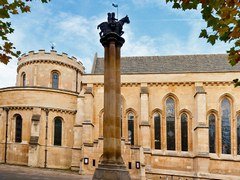 The Temple Church was built by the Knights Templar during the 12th Century, during the reign of King John. The building contains stone effigies from the 13th and 14th centuries, and survived heavy bomb damage in World War II.


Entry charge: Â£5.00 (Â£3.00 senior citizens). Free to 18s and under, members or staff of the Inns or of Chambers; and those who would like to come to say a prayer (you will be directed to the east end of the church)