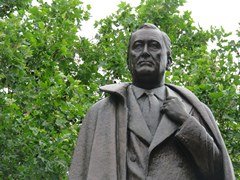 Memorial to American President Franklin Delano Roosevelt who was a close ally in World War 2.


The memorial is located in Grosvenor Square, which until recently was the location of the American embassy. The statue was paid for by public donations and was unveiled by Eleanor Roosevelt in 1948.