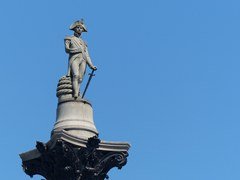 
The monument is 51.6m tall and stands in Trafalgar Square. Apparently Adolf Hitler intended to move it to Berlin if his invasion had been successful.


Opening Times:
Public access to the area is always open.