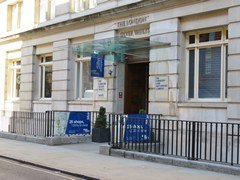 Subterranean Chancery Lane is home to the London Silver Vaults. Opened in 1876, the Vaults were originally provided as a place to story household silver and jewellery. It now houses more than 30 shops displaying fabulously crafted antique and modern silver.


The vaults have never been broken into and there was no damage to the vaults even when the building above them was hit directly by a bomb during World War Two. It is said to have the largest single collection of silver for sale in the world.