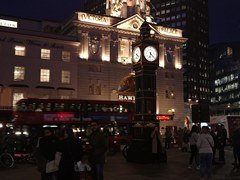 
The clock was built in Croydon by Gillet and Johnstone who are still making and maintaining clocks today. It was originally installed in 1892 but has been away fro a few years of its life due to redevelopment works. It was replaced in its current location in 2016 after a 4 year break.