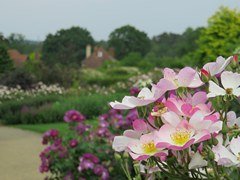 Previously the garden of Eastcote House dating from the 16th century but demolished in 1964.


The old coach house, 17th century walled garden, 18th century dovecote and Ha-Ha all remain. The River Pinn crosses the park and an orchard was planted in 1984 to commemorate the Queen Mothers 80th birthday.