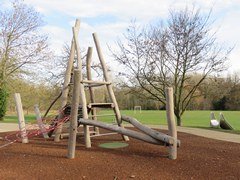 
The 40 acre site now houses a copse of mature trees straddling the River Pinn, a trim trail and a childrens playground.