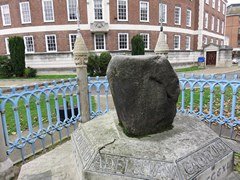 The Kings Stone or Coronation Stone is an ancient stone block used in ancient times as the site of coronation for Anglo-Saxon kings. Kings said to be coronated here are Aethelstan in 925, Eadred in 946, Aethelred the Unready in 979.


There is evidence to suggest that Edward the Elder, Edmund I, Eadwig and Edward the Martyr were all coronated here, and the stone is what gives Kingston its name.