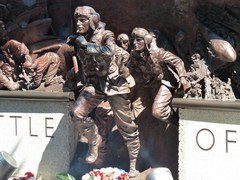 Unveiled on 18 September 2005 this is a memorial to British forces who took part in the Battle of Britain.


The memorial is located on the Victoria embankment and is based on an existing structure originally used as a smoke outlet from the Underground railway in the days of steam trains.


Opening Times:
Public access to the area is always open.